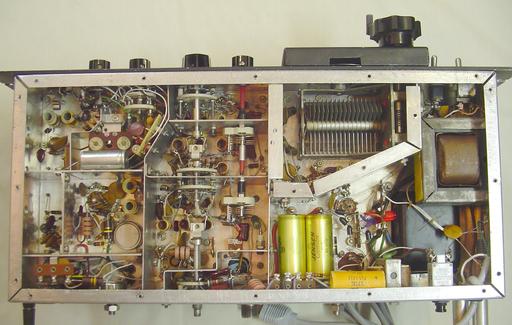 Top view.  A single 6146 PA puts out about 50 watts PEP on 80 thru 20 and hardly anything on 15 for reasons I have never figured out. The filter is a 9 MHz crystal unit with 2.8 KHz bandwidth.  It was made by an outfit called ESEL (Excelsior Springs Electronic Labs).  Bet you never heard of them.

Front panel.  The case is made from some scrap tempered aircraft aluminum I got from the sheet metal shop at the Air Force base where I was stationed at the time. In retrospect this radio was an ambitious undertaking, but at the time I was in my early 20s and it never occurred to me that I might not succeed!

Copyright © 2019 KG7TR.  Technical information on this site may be shared in the interest of promoting the hobby of amateur radio.  I do ask that you give proper credit to KG7TR for my equipment designs.

I built this transmitter from about 1968 to 1972.  It was originally a phasing type rig that I later converted to a filter type when I could afford a filter. The design is basically one I found in the ARRL SSB handbook titled "Filter Type with 100 Watt Output".  Among other things, it uses a 7360 tube for the carrier oscillator and balanced modulator, a circuit I had nothing but trouble with.

This radio was described in the September 1992 issue of Electric Radio.

When it was built the only test equipment I had was a Heathkit VTVM and an RF probe!  Needless to say when I finally got some decent test equipment two decades later I discovered it needs a lot of rework.  The chassis is way too small, making modifications difficult in my "later years".  Maybe one of these days I'll tear into it...

Bottom view.  A lesson learned here is don't homebrew with a chassis that's too small!  Familiar ARC-5 VFO components are seen in the upper right.  I have used these in all my radios with excellent results. 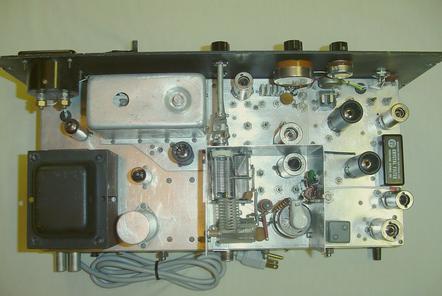